Looks like you're in the . Would you like to be redirected ? Yes or No
FREE SHIPPING WHEN YOU SPEND JUST $150 ON ALL PARTS & ACCESSORIES***
Home / Blog / The Bullitt Cargo Bike: A Love Story 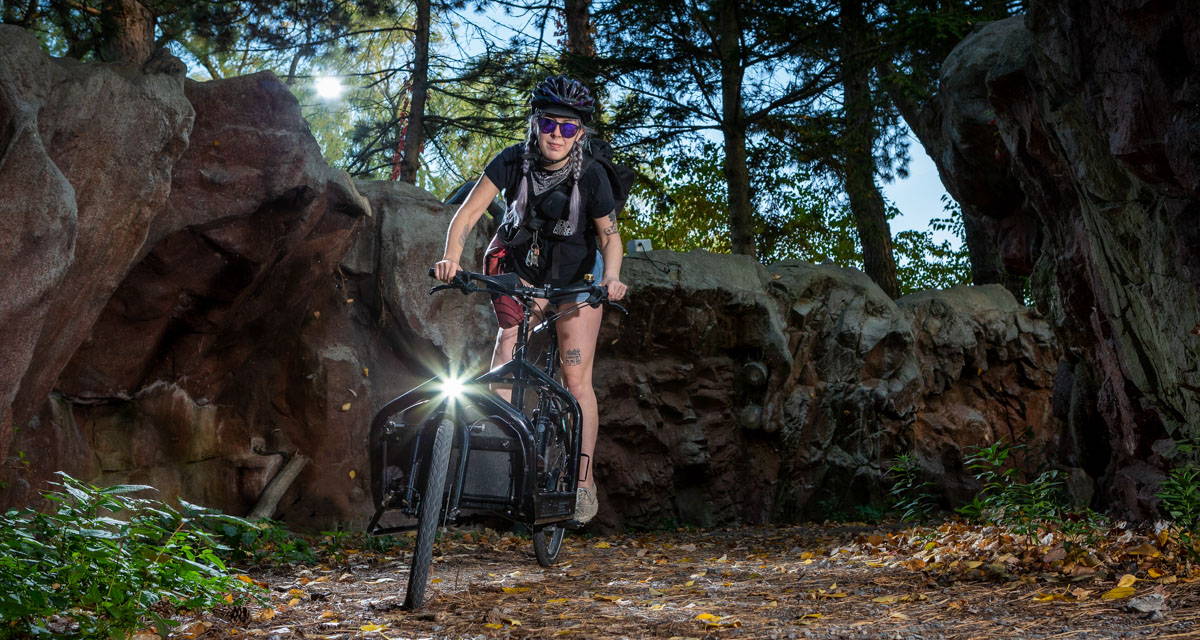 From the moment I first laid my eyes on the Larry vs. Harry Bullitt cargo bike, I knew I was in love. The bike is elegant and simple, modern and stylish. It’s the design that made cargo bikes appealing to multiple demographics - from messengers hauling oversized packages to families hauling their children and other precious cargo - and I knew I needed one.

The Bullitt is designed by an interesting pair of cyclists. Larry (Lars) was a contractor and Harry (Hans) was part of another Danish company that specialized in cargo tricycles. The pair met and set out to build the perfect and sexiest cargo bike on the market. Their inspiration came from their love of late 60s and 70s American muscle cars. These cars are fast, sexy, and iconic but a glaring issue is their fuel economy and carbon emissions. The Bullitt was the brainchild of all their hard work, studying these iconic car designs to create the coolest, sexiest and fastest cargo bike in the world, a bike that can carry just about anything. 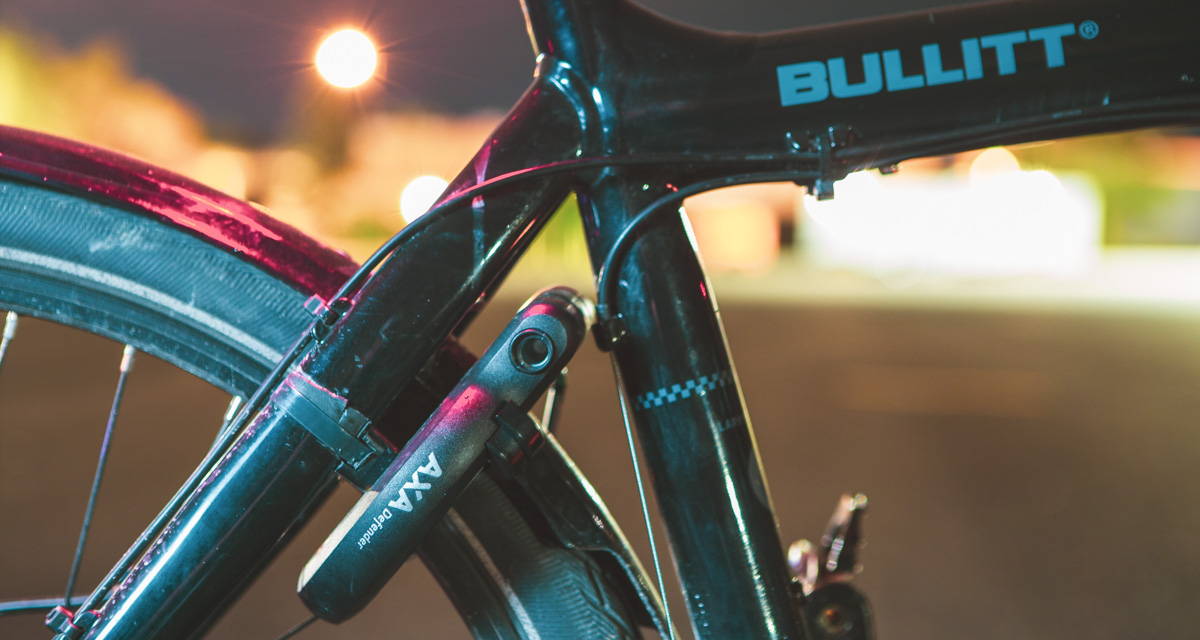 I first became acquainted with the Bullitt when I lived in Chicago. The year was 2012, I was just getting out of college. I was working as a bike messenger, and lived in places all across the north side of the sprawling city. A great friend of mine, Brandon, was an importer of the Bullitt. I was moving into a new apartment, and being the industrious, stubborn, debt saddled college student I was, I decided I wasn’t going to pay a moving company. I was going to do my move with the Bullitt. Brandon lent me his beautiful Yellow Submarine and I began to move my things. I secured my suitcase and a few very heavy boxes to the cargo bed, and set off into the streets. I remember starting out, thinking how crazy I was to attempt this. But block by block, I got more comfortable with the bike, confident with the steering, and to be completely honest, I just felt so cool! I reached my new apartment and felt so victorious. What now? A joyride, of course. I rode that thing all around town - from the Loop to Lincoln Park Zoo, racing down the city’s wide boulevards, and finishing off with a rip down the Chicago Lakefront Trail. I felt like the coolest guy in the city - it recaptured the freedom I felt riding my first real bicycle as a kid, but this time as an adult on a cargo bike. I knew that one day I was going to need one of my own.

Living a bit of a “bohemian” lifestyle and bouncing around, it took me 8 years to finally pull the trigger to purchase my own Bullitt, and that’s where the real love story begins. I first came to Toronto in 2015 to visit a group of friends that I had met at a cycling event in Minneapolis. During my stay in Toronto, I met the most beautiful woman I have ever met, full of life, excitement and joy in everything she does. 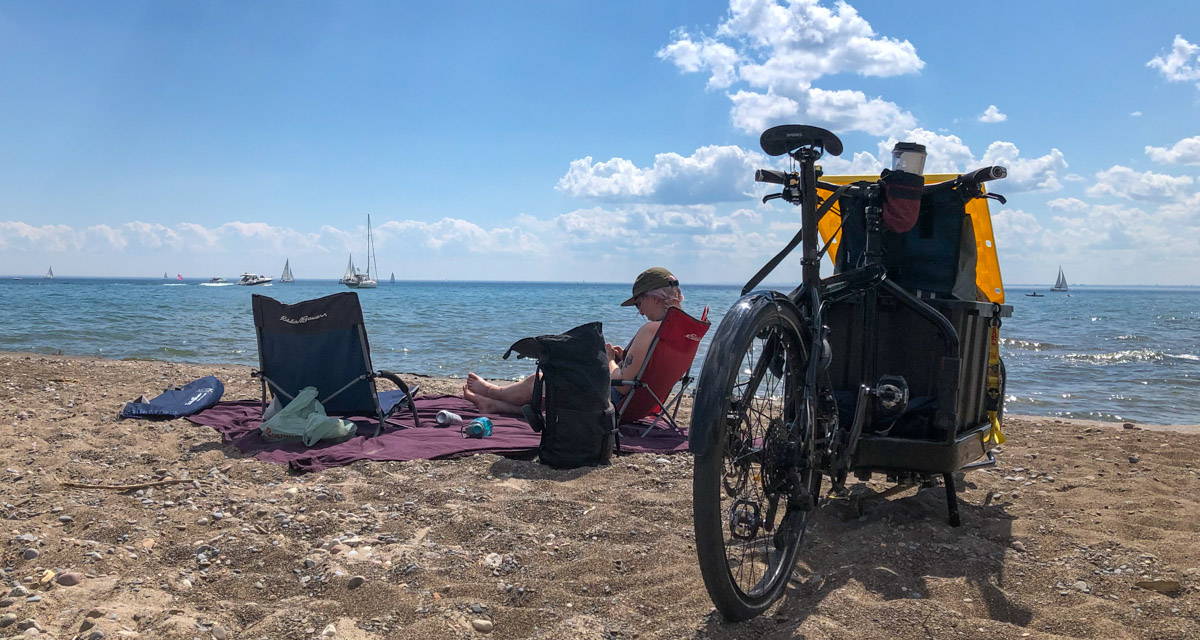 Summer time on the Toronto Island.

Alicia and I fell in love, spending the summer riding our bikes around with friends, occasionally riding cargo bikes borrowed from the messenger company she works for. How are we going to get all that firewood and beer to the beach without a car? That’s what the Bullitt is for. These whimsical treks around the city solidified my love for cargo bikes, and for Toronto. Unfortunately, I could not stay past the summer as my visitor’s visa was up, and so I returned to Chicago. The next year we had decided that I would move to Toronto, and by the end of that year we married.

The idea of owning the Bullitt hadn’t disappeared, and while it did take a few more years to finally commit, in November 2019, we finally did it - I went to Curbside Cycle to put a deposit down for the Classic Black Deore 20 Bullitt with the honeycomb board. After months of waiting, I got the email that it had arrived, and that it would be ready for pickup on Valentine’s Day 2020. Perfect. Alicia had not known it was ready - I had told her it was going to take another month or two for delivery - and I rode it down to her office to surprise her with our new around town vehicle, winning Valentine’s Day forever.

That was one of the most exciting New Bike Days to date, but that’s only where the fun began with fresh ownership of such a mighty bicycle! From there on we needed to make it ours. The frame comes in one standard size, but there are several ways to customize it for different sized humans. I’m nearly a foot taller than Alicia, and so we had to figure out the right combination of parts to make it work for both of us. Within days we had swapped out the stock handlebars to a much more relaxed and comfortable set up: the FSA Metropolis bars paired with Ergon grips. The bars swoop back at a 45 degree angle allowing for more of an upright position, which we found more comfortable paired with the wrist support from the grips. Every complete Bullitt is equipped with a Satori Easy-Up Lite Stem, making it easily adjustable for different riding positions. A new Brooks Cambium C19 Carved saddle, and we were both ready to ride! 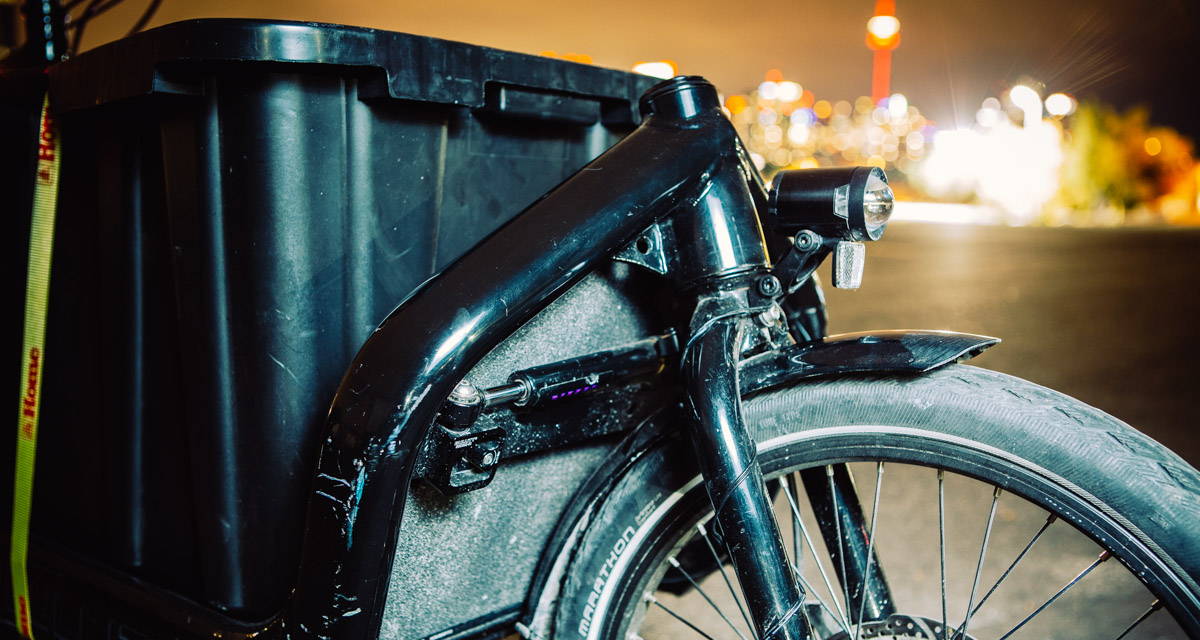 Found at your hardware store: Tote bin with a tie down. Bullitt Accessory: Steering Damper Kit. Must Have: Dynamo Lighting

While the accessories that Larry Vs Harry sells are incredibly thought out, each and every accessory is very specific to an individual needs. We believed the Honeycomb board as essential as we were not committed to making our own sturdy deck for the cargo bed. We chose that - and since we needed the flexibility of keeping a bin on or off for the front - we went with a large plastic tote bin from Home Depot, paired with the quick action of ratchet tie down. The other accessory from LvH we chose to upgrade with was the Steering Damper Kit, which adds an immense amount of adjustable stabilization to the steering, reduces speed wobbles and provides stability and confidence on rough terrain with varying weight loads. 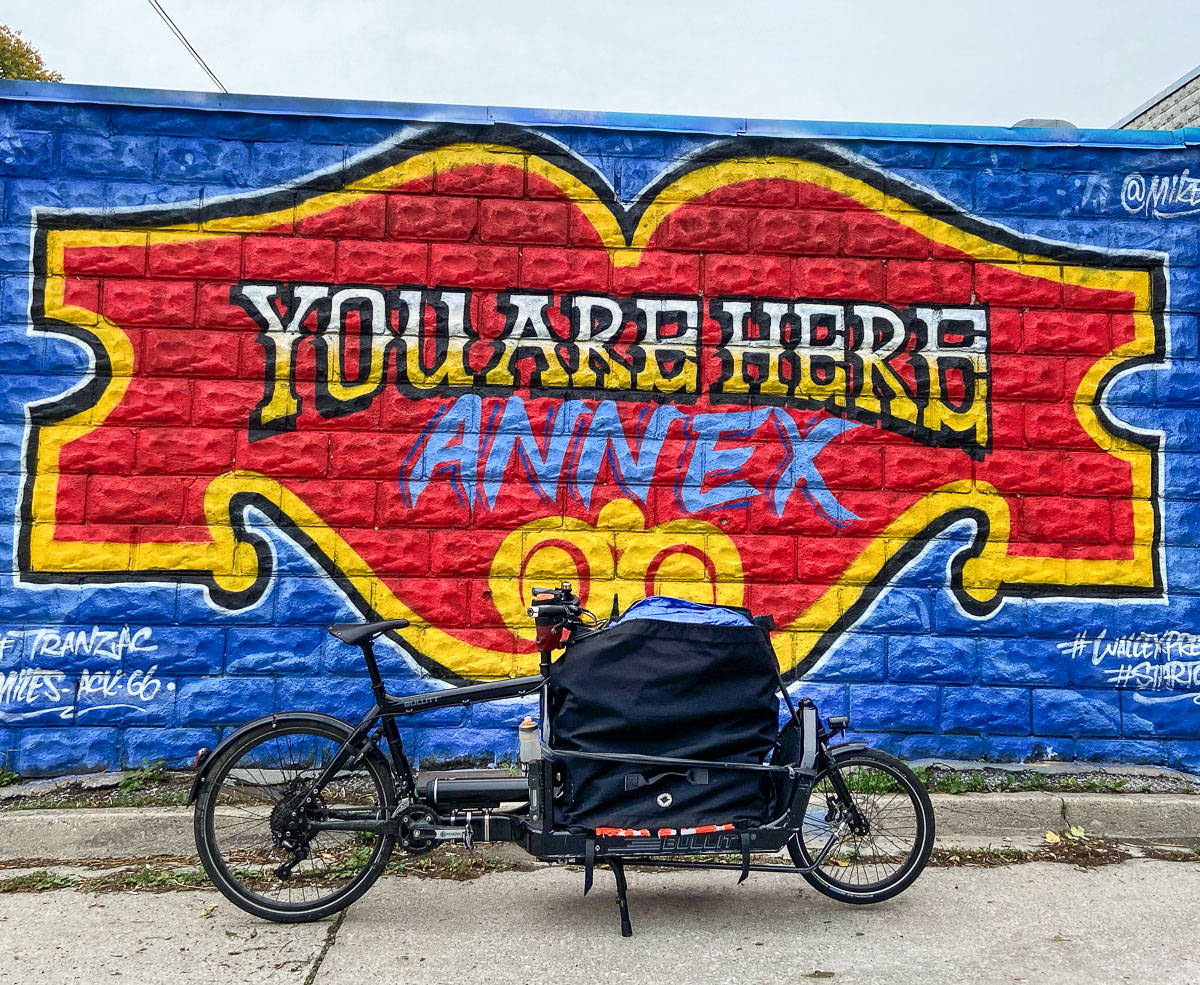 Many people believe the Bullitt to just be a delivery bike, but it is so much more than that. To us, it is our family car, but in bike form. We use it for groceries, our portable BBQ grill, beach accessories such as lawn chairs and sun shades, as well as moving heavy and cumbersome items. Believe it or not, it's also an amazing bike for a date! Occasionally Alicia will sit in the front as I cart her around in the Bullitt, sightseeing our way through the Toronto streets and parks, going places cars can’t go, and stopping wherever we like without having to worry about finding (or paying for!) parking. It’s incredibly versatile, and we continue to find new uses for it on the regular. 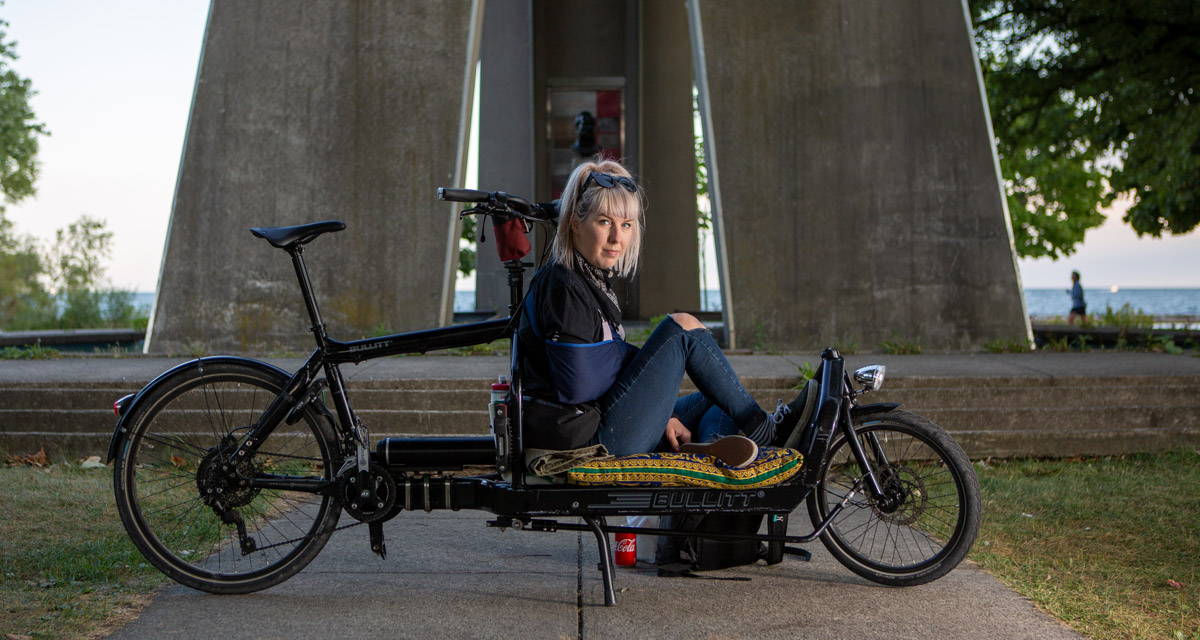 For me personally, the Bullitt has re-sparked the joys of cycling. It has brought my wife and I closer together, allowing us to do many things that a regular bicycle or trailer setup falls short on. While the cargo bike industry has exploded in terms of choices, the choice was clear for us. The Bullitt is the Swiss army knife of cargo bikes. Its unmatched versatility deserves your full attention and consideration as one of the fastest, most reliable, well thought out and, as Lars and Hans say themselves, just plain sexiest choices on the market.

While the start up cost is quite large, we chose the Bullitt over a car because it is much more suited to our needs while living in the urban center of a large city. In the long run, it is thousands of dollars cheaper than a car - the annual cost of upkeep, insurance and gas on a motor vehicle in Toronto would far outweigh the cost of a Bullitt. It’s also a great way to keep active and stay in shape, and have a ton of fun doing it. Alicia and I own several bikes between us (N+1, am I right?), but we occasionally bicker over whose turn it is to ride the Bullitt. It truly is the bike that can do it all, and it looks incredibly cool doing it. 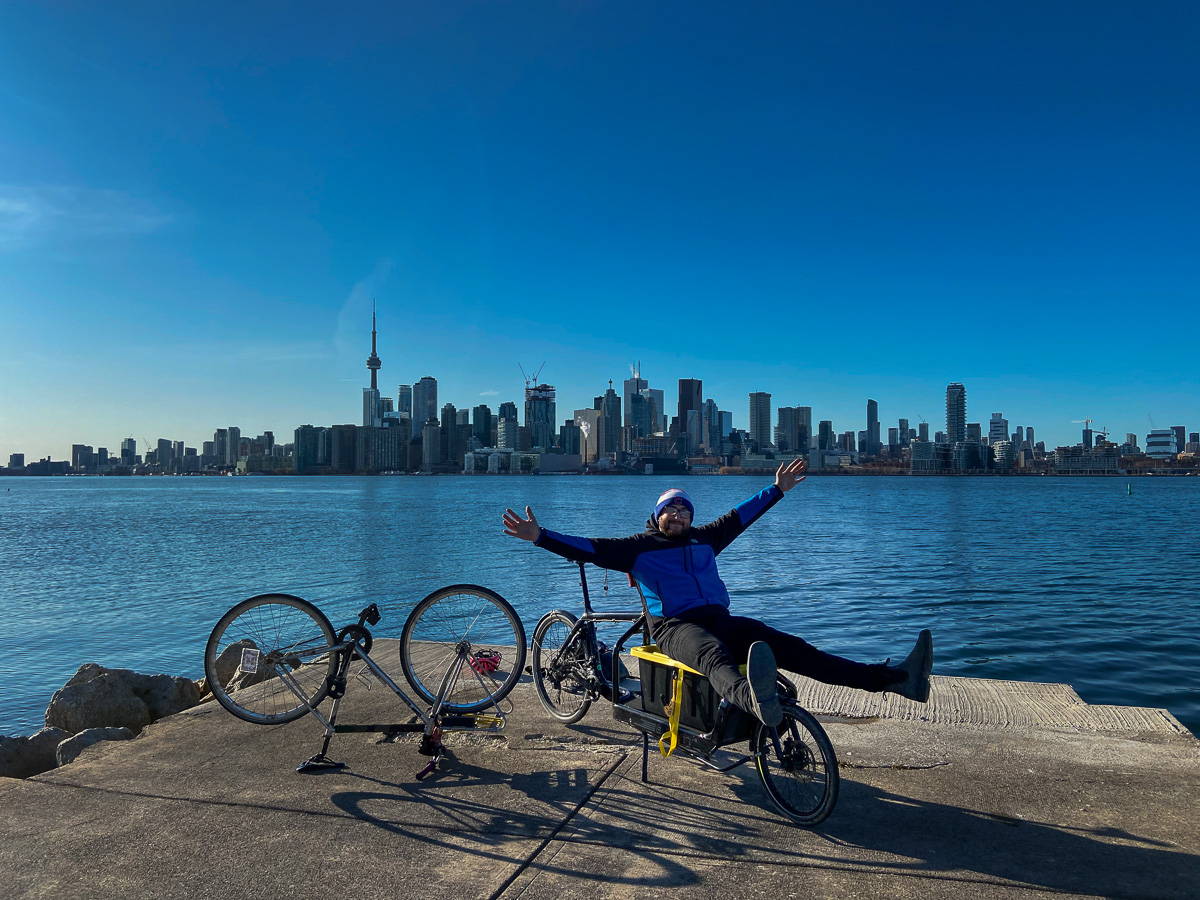 For me personally, the Bullitt has re-sparked the joys of cycling. It has brought my wife and I closer together, allowing us to do many things that a regular bicycle or trailer setup falls short on. While the cargo bike industry has exploded in terms of choices, the choice was clear for us. The Bullitt is the Swiss army knife of cargo bikes. Its unmatched versatility deserves your full attention and consideration as one of the fastest, most reliable, well thought out and, as Lars and Hans say themselves, just plain sexiest choices on the market.