Looks like you're in the . Would you like to be redirected ? Yes or No
FREE SHIPPING WHEN YOU SPEND JUST $150 ON ALL PARTS & ACCESSORIES***
Home / Achielle 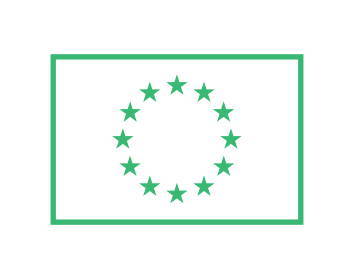 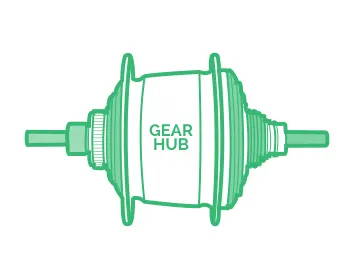 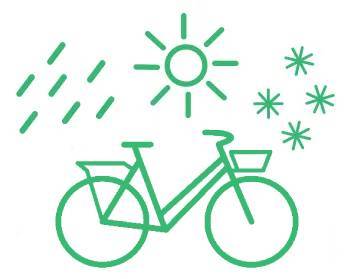 Strong finishes for all weather 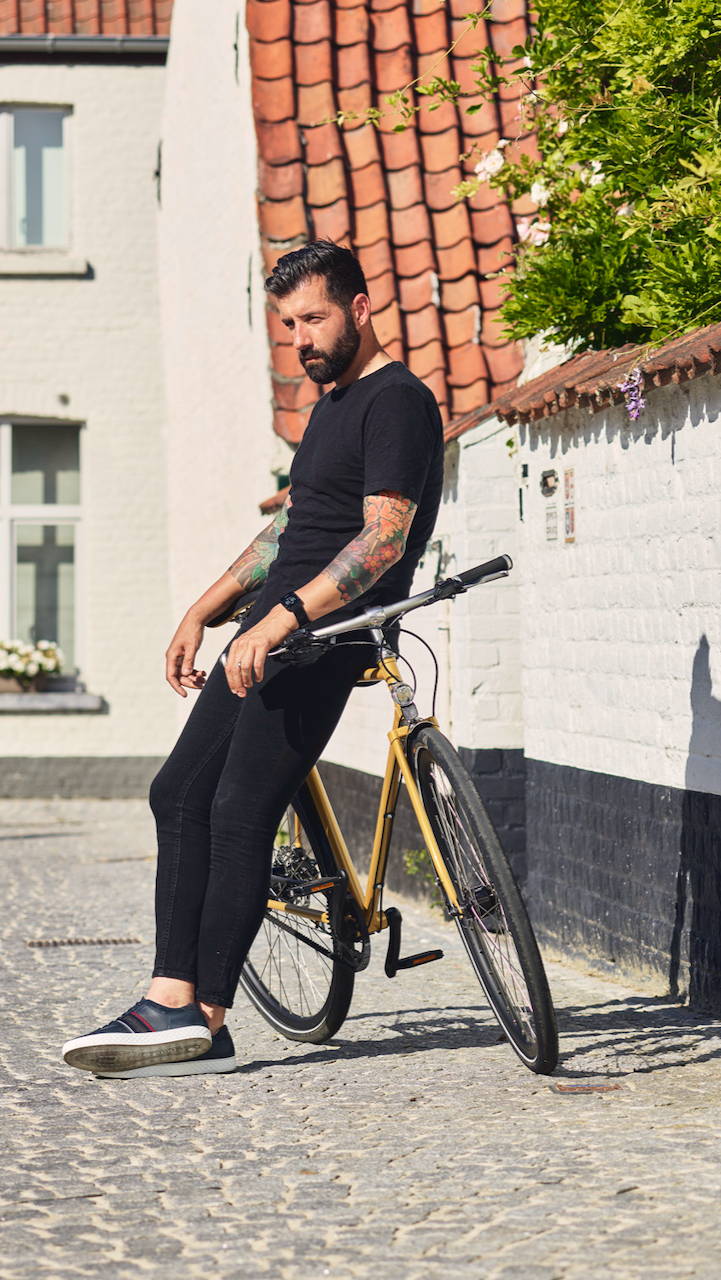 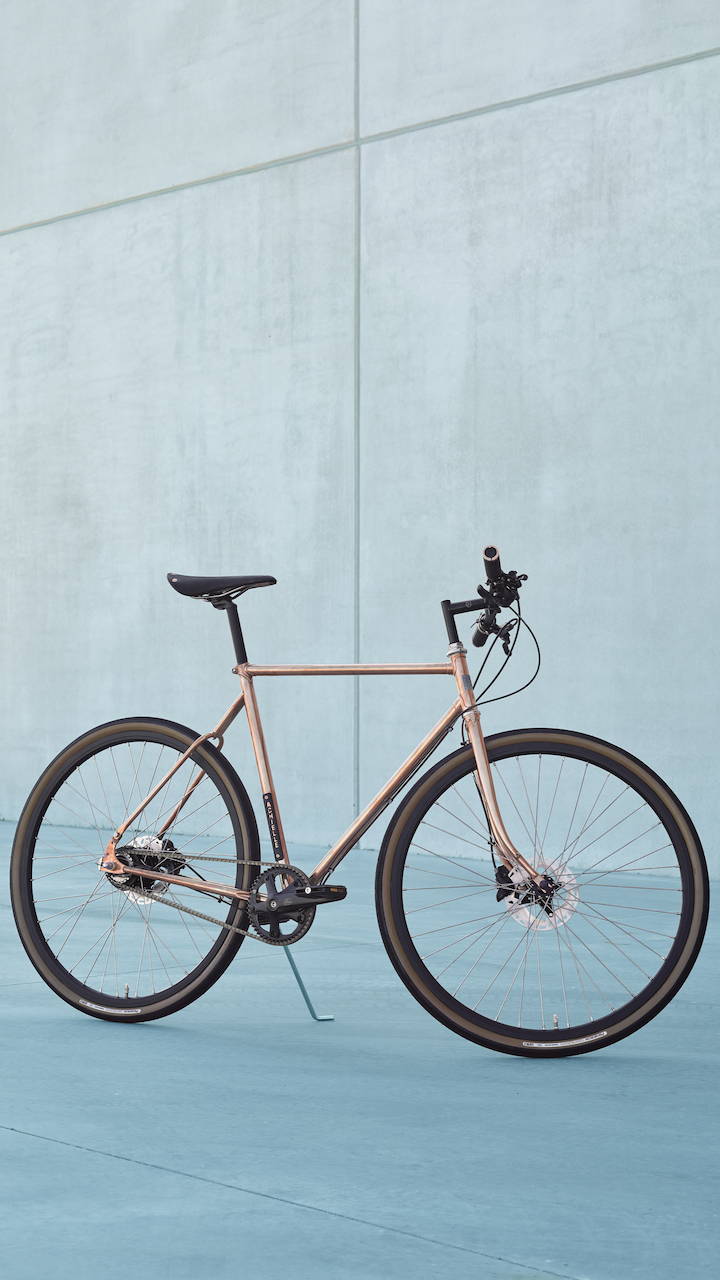 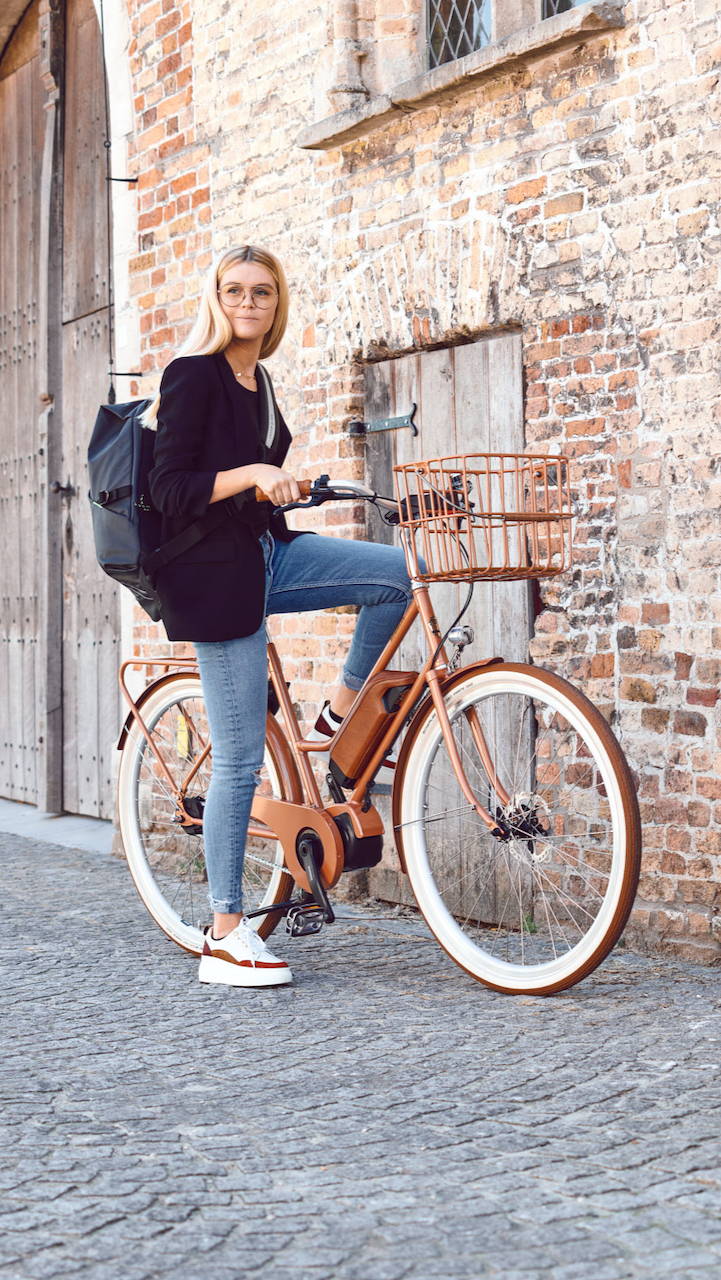 Achielle began in 1946 with none other than a man named Achiel, who started a bicycle shop in the small town of Zwevezele, near the historic town of Brugge.

From the very start in 1946, Achiel made many of his own bikes himself, including welding the frames! He got so good at this that he began producing frames for local bicycle shops, to the point where he decided to close his shop and make bicycles full time.

In 1963, having established a reputation for quality frame production and one of Europe's finest paint shops, Achiel began producing bikes on contract for many Dutch companies. Chances are good that if you see an old bike still operating in Amsterdam, it was made by Achielle.

In the late 90's, something big started happening in the Dutch bike industry. Small companies were swallowed by bigger companies, and these bigger companies, motivated by profits over local jobs (and quality), moved their frame production to China.

Achielle soldiered on. They refused offers from big companies and continued to mitre raw steel tubes, turning them into finely crafted frames; and finishing these frames with famously durable finishes. With over seventy years making bikes, Achielle continues to be a family business, producing bikes under their grandfathers name.

“Made in Belgium”, “Handmade in Europe”, …Numerous European bicycle brands claim their bicycles are made locally. Why then does Achielle call itself a genuinely local bike? What’s the difference?

If you replace “made in” by “assembled in”, you would be closer to the truth. Many manufacturers build their bicycles from frame and components bought mostly in Asia. This is unfortunate, as a wealth of knowledge, many years of experience and numerous jobs have been lost in this manner. Many of today's "Dutch bikes" do not qualify as durable, low-maintenance or all-weather bicycles. And, inasmuch as they do not qualify, they are not quality.

Achielle takes a different approach. They prefer to swim against the tide, do not opt for the easiest solution and keep on building their own frames one at a time. This enables Achielle to put their heart and soul into the very essence of every Achielle: its frame. They then look for the best European components to equip the frame, such as Brooks, Van Schothorst, Rigida, Hebie, Steco, AXA Basta, Abus, Busch & Muller, the list goes on. These are companies, who, like Achielle, continue to design, manufacture, and innovate better city cycling products in the world's most experienced city cycling ecosystem.

So an Achielle is not just “made in Europe”, but actually “made, built and assembled in Europe”. That’s why an Achielle is a genuinely local bike!
These efforts have been awarded with the ‘Handmade in Belgium’ label. 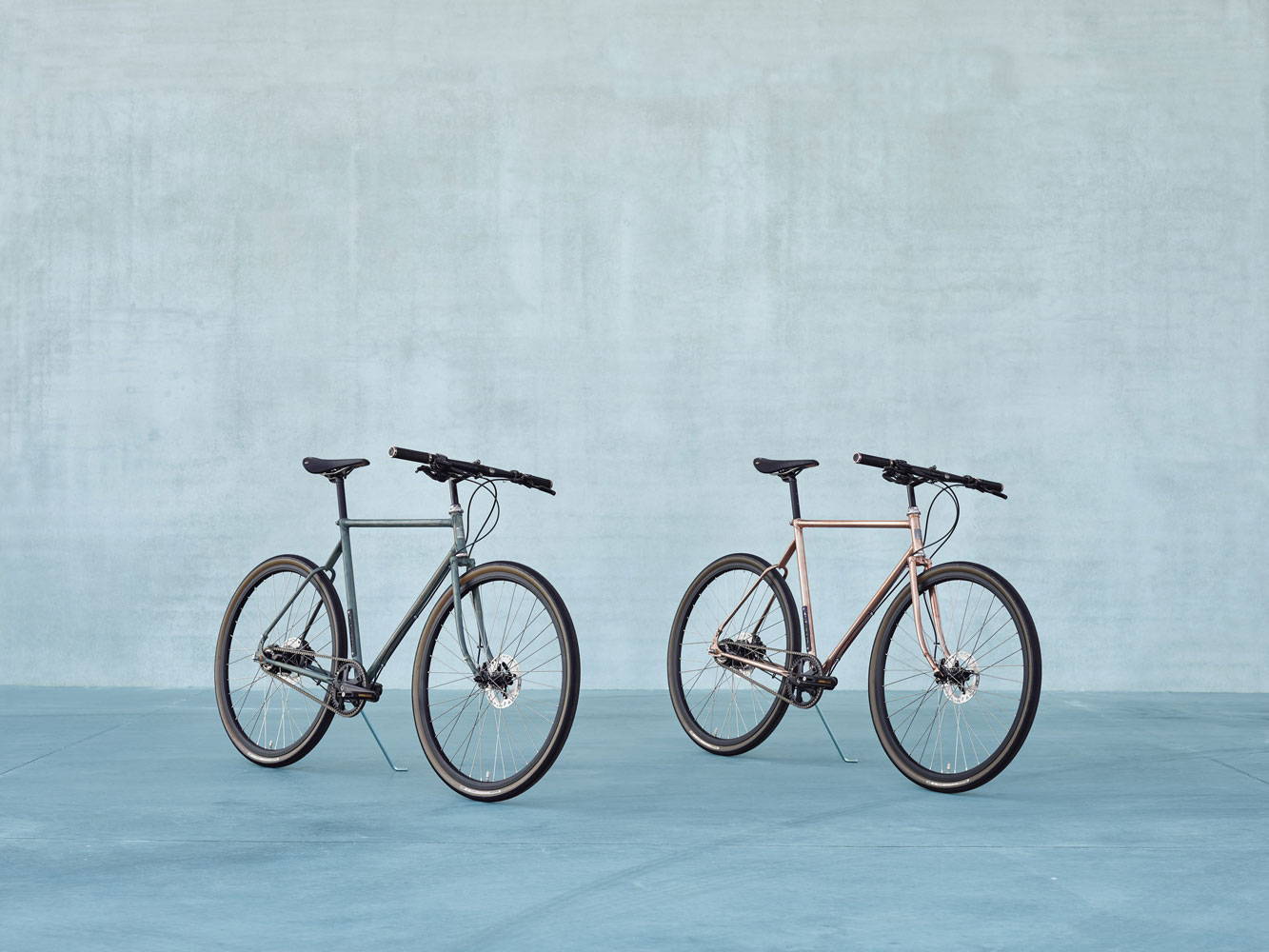 “The Dutch life is beautifully attuned to the deliberate pace of bicycle riding. It has the same calm and slow rhythm which allows the Hollander time off for coffee in the middle of the morning, for tea in the afternoon, and tea again in the evening. . . . To a Dutch person a bicycle becomes a matter of individual expression, almost a part of the body, controlled subconsciously and leaving them free to meditation. There is no noise, no smell of gasoline, so they can notice little things like birds and flowers, which the automobilized American leaves in the roar and dust.

PETE JORDAN - IN THE CITY OF BICYCLES

Nothing is stronger than steel. And, nothing rides like steel. Steel naturally absorbs road vibration, making your potholed commute that much more comfortable. And, it's built to last a lifetime. Each Achielle is manufactured the classic way: with gorgeous steel lugs that guarantee strength.

Most companies treat paint as something that sells a bike, rather than something that protects a bike. Achielle's finishes are beautiful, using a wide range of on-point RAL colours, but they are also tough as nails. Frames are painted with a thick powdercoat, a method that produces strong chip-resistant finishes that are as structural as the frame itself.

Because Achielle builds each bike one-at-a-time, they can build a bike just for you! We tend to order Achielle's in large orders, according to Curbside specifications, but if you're hungry for something extra special, we'd love to help. For special orders, please email eric@curbsidecycle.com

With it's unusually tall head tube, it's easy handlebar reach, and swept-back bars, the Achielle Craighton is pure poise. You sit straight up, almost as if in a yoga 'mountain pose', arms resting gently on the handlebars, shoulders squared, head alert. The Craighton is the grande dame of city bikes, the grandmother, the Oma. Here you can comfortably do what all Dutch people do: pick up your date on the rear rack, and while they sit, both of your finery is kept oil-free by the full chainguard as the dynamo lights cuts a bright beam into the night. This is where the city bike first began, and for many it remains the archetype, something perfect. Ride one and you'll feel a touch regal and a touch revolutionary, like your paving a bike lane with each pedal stroke. 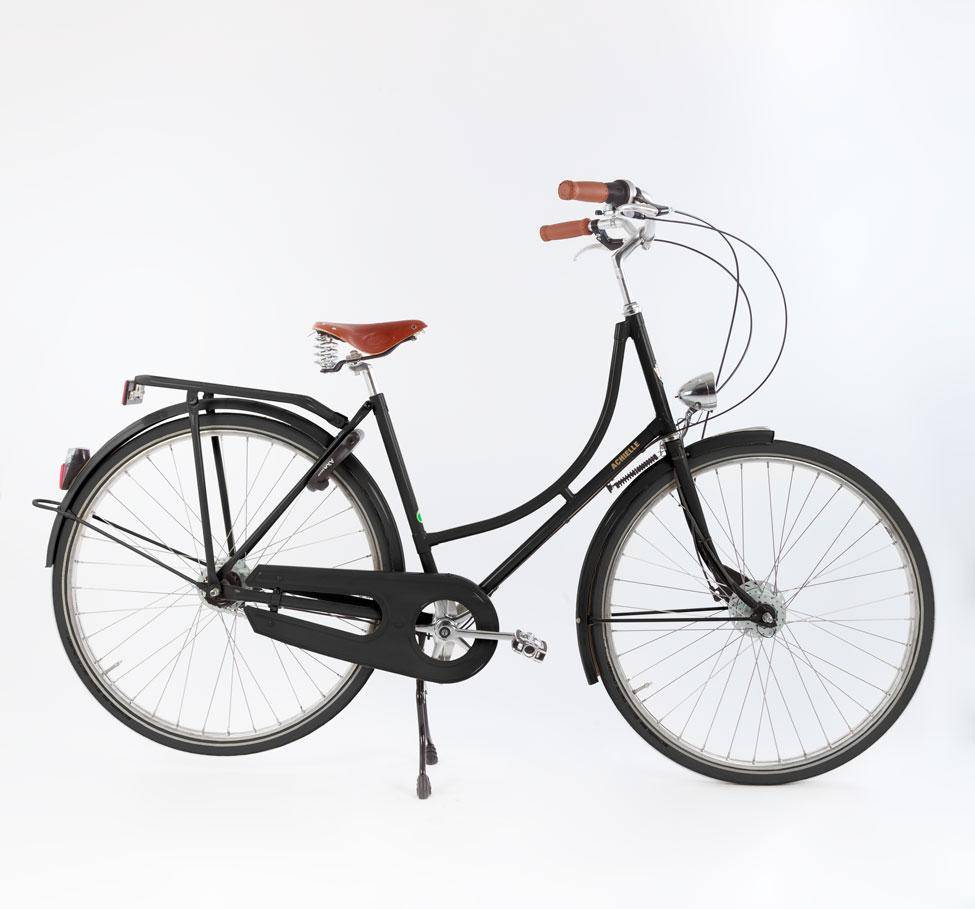 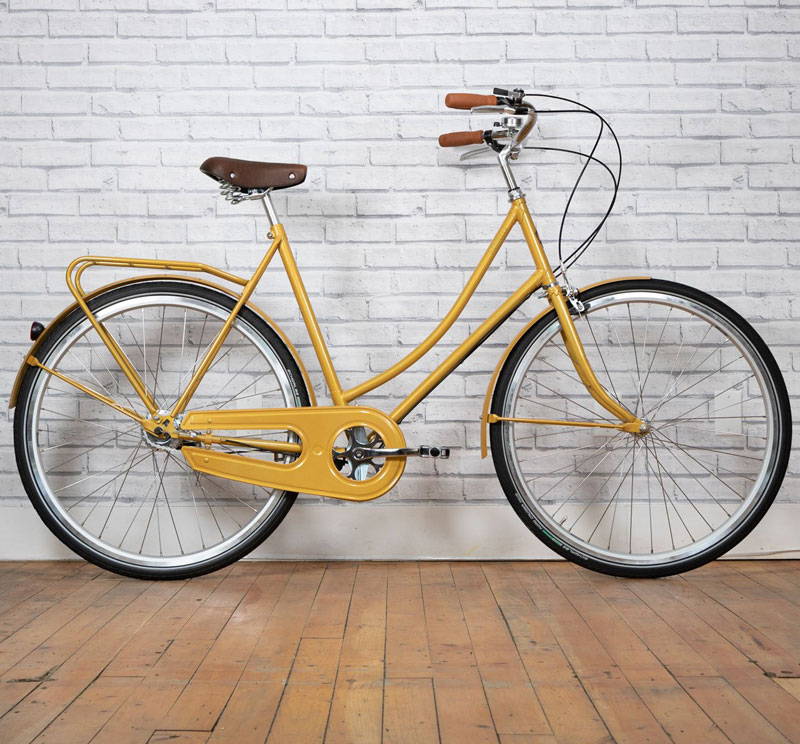 "The Babette and Basiel recall the classic Raleigh "lightweights" that came out of the UK back in the 70's. The 'lightweights' were designed for longer rides and bigger hills. The Basiel and Babette lean the body ever so slightly forward, giving the rider a bit more power to the pedal and upright comfort with sportier handling. 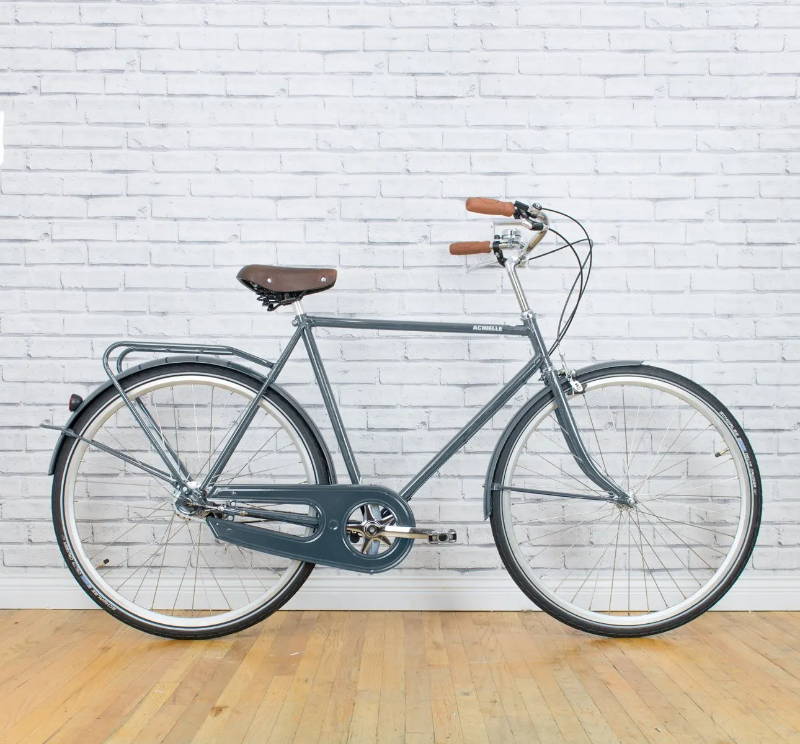 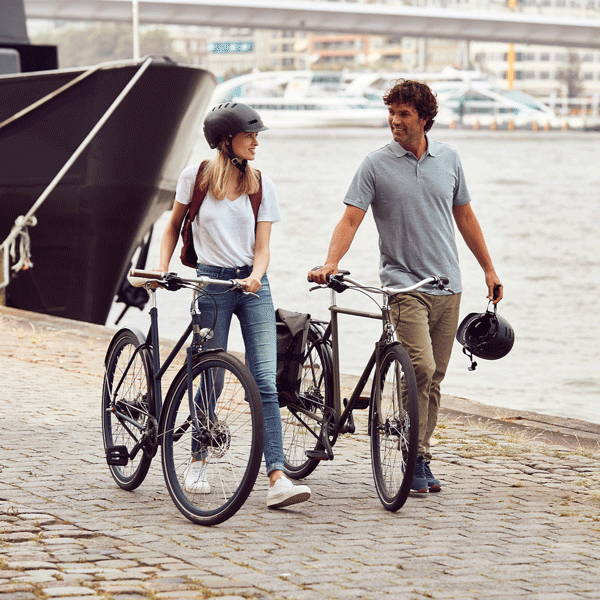 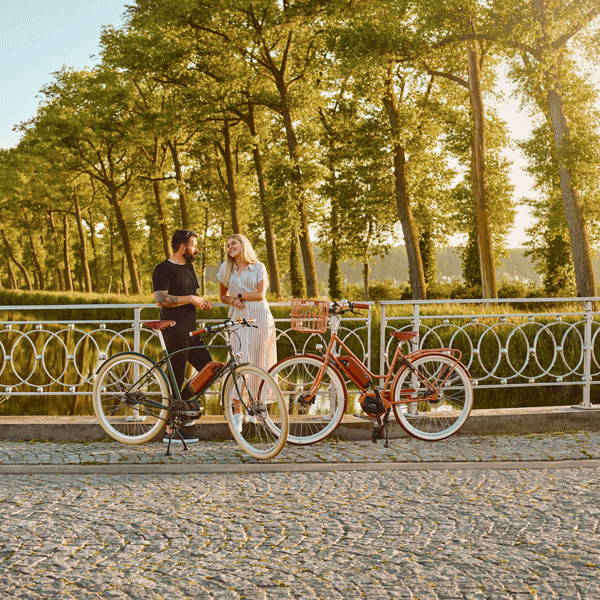 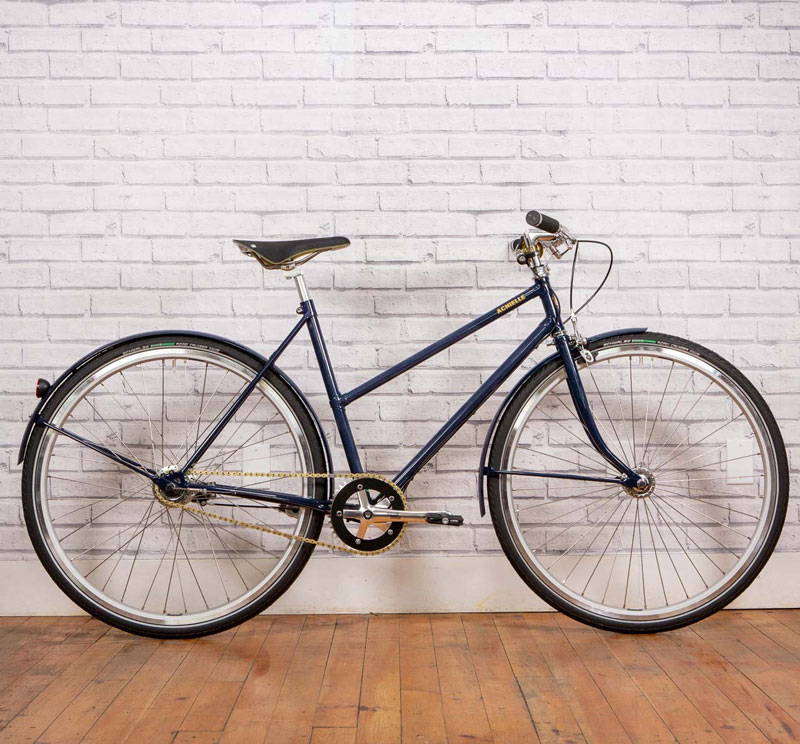 The Sam and Saar are inspired by Copenhagen; with clean, crisp lines and a sporty position that the Danes seem to prefer (Copenhagen, for such a small city, is remarkably sprawled out). Imagine a road-racing bike with Dutch parts: this is it. This bike is fun and fast like a road bike with the same low-maintenance and weather-resistant parts that give Dutch bikes their pedigree. Brooks rubber grips and saddles lend a modern yet classic feel. 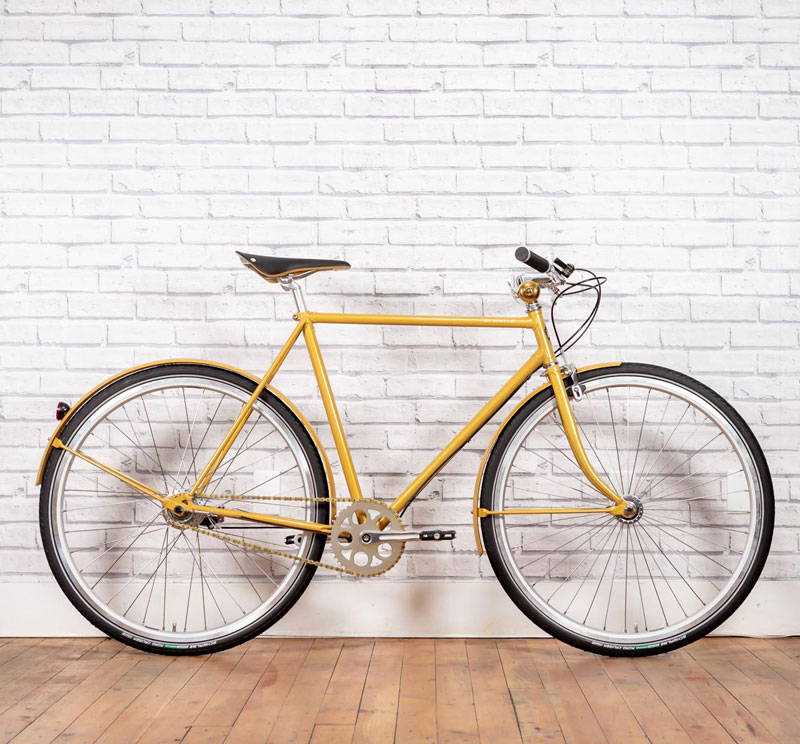 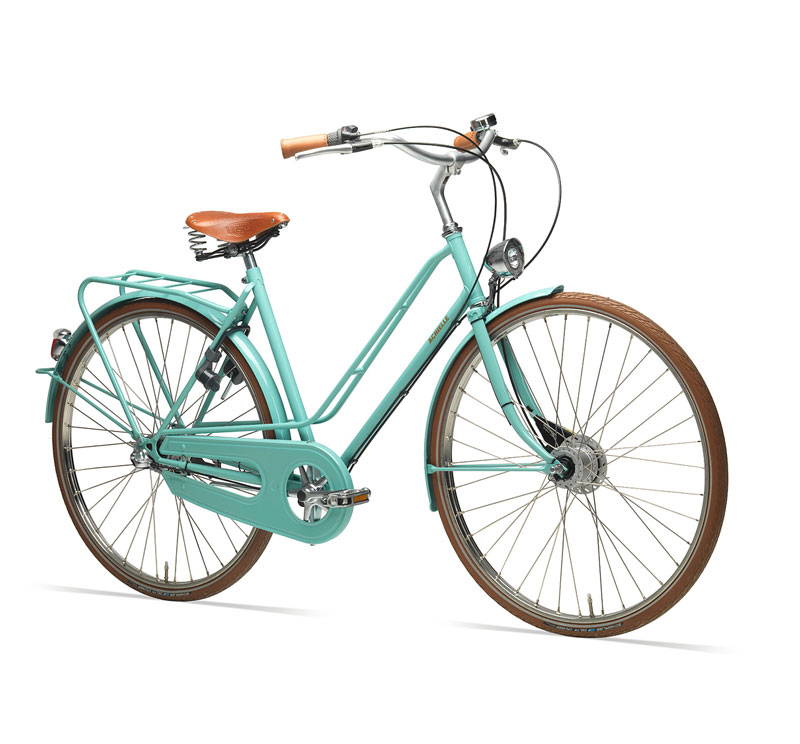 The Louise updates the classic French Mixte design with all-season Dutch durability. One of the most difficult bikes to construct due to its many brazing points, the Louise is pure craftsmanship that rides even better than it looks. The Louise has a seating position optimized for greater distances and hills, with sportier cornering and more power to the pedal. 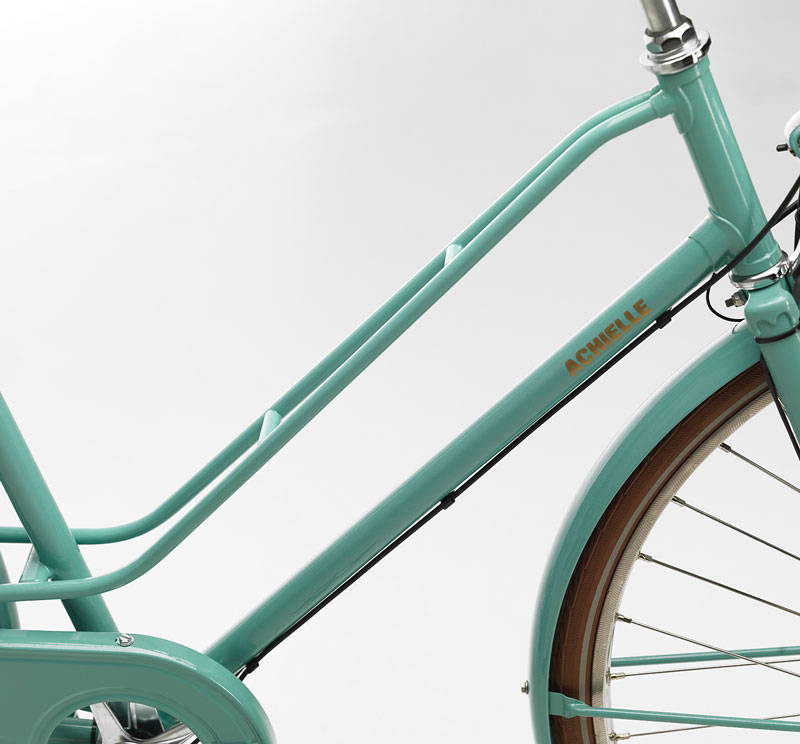 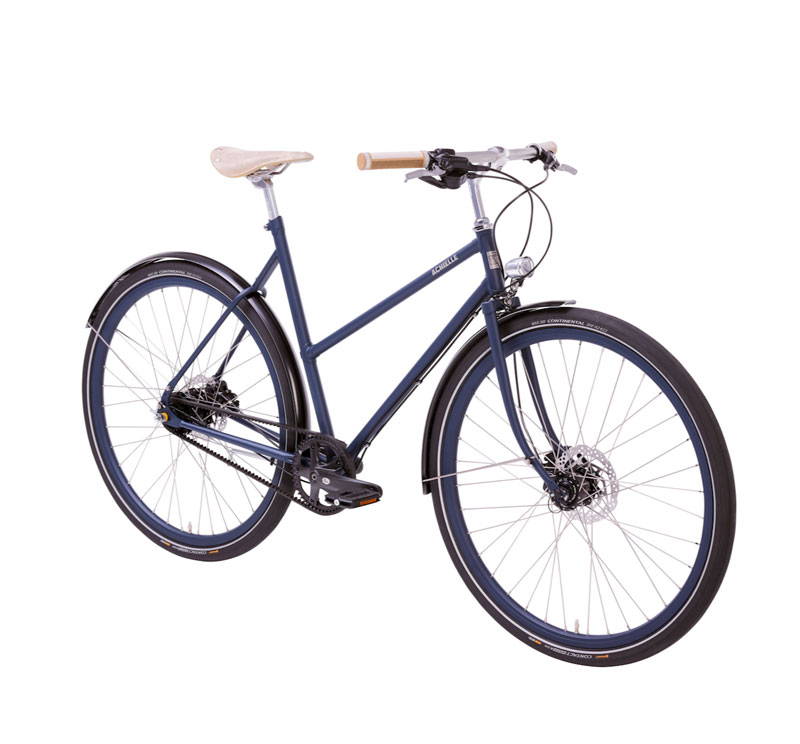 The North American commuter bike has pushed European design to consider even longer rides, even more hills, while pushing technology hard. However, most North American commuters are beastly aluminum machines that lack craftsmanship and elegance. The Oscar and Olivia have modern disc brakes, high-powered dynamo lighting, and low-maintenance belt drives, but are handmade in Belgium from durable steel, powdercoated to last a lifetime. 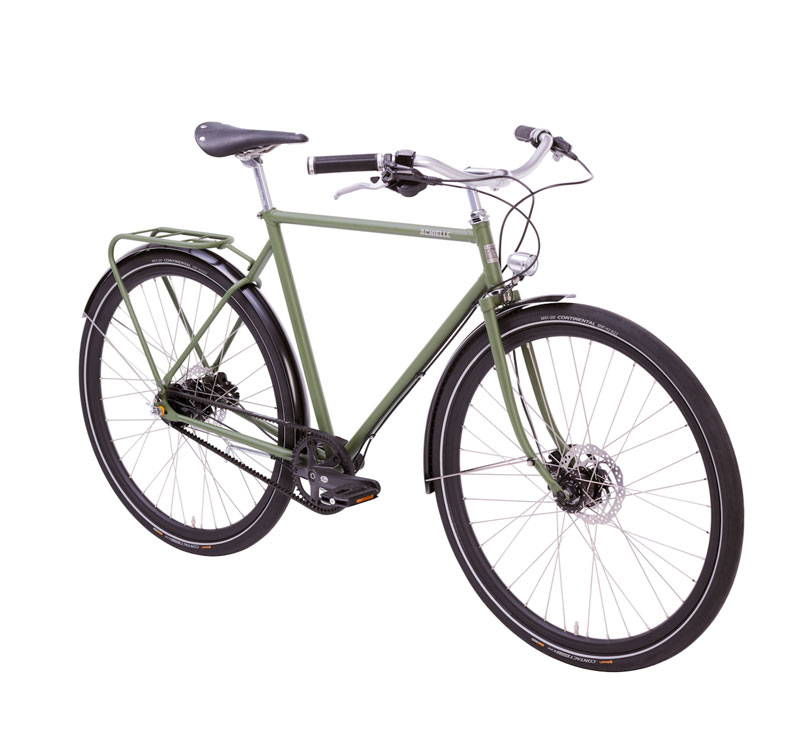 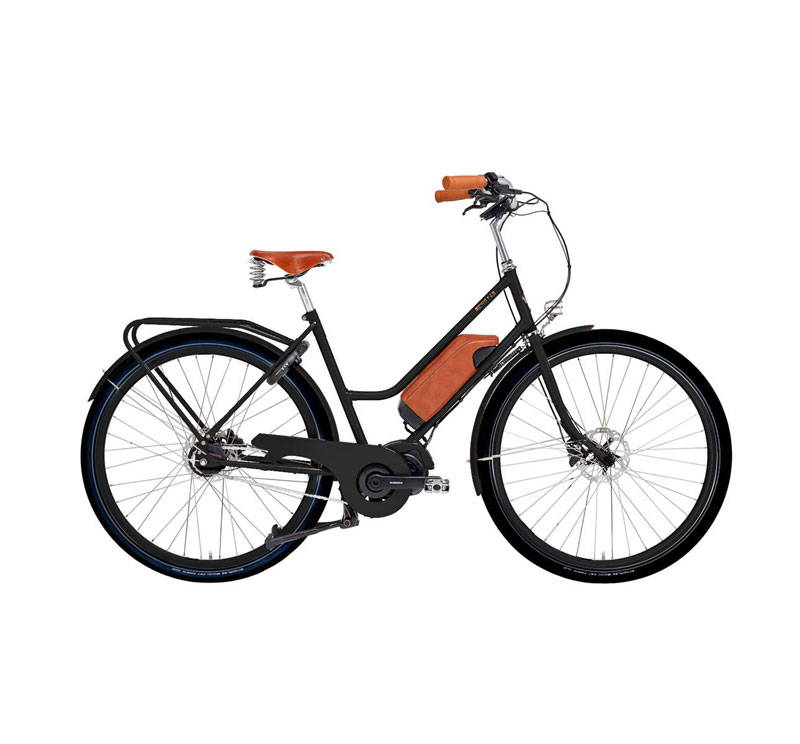 A lot of modern e-bikes can be guilty of looking a little... too modern. Truth is, steel is still stronger than aluminum, and absorbs road vibration much better too. So, even apart from classic good looks, an Achielle e-bike is as comfortable as it is stylish. Strong too. Equipped with a modern Shimano motor, powerful disc brakes, and gorgeous touches, like the lush leather battery cover. 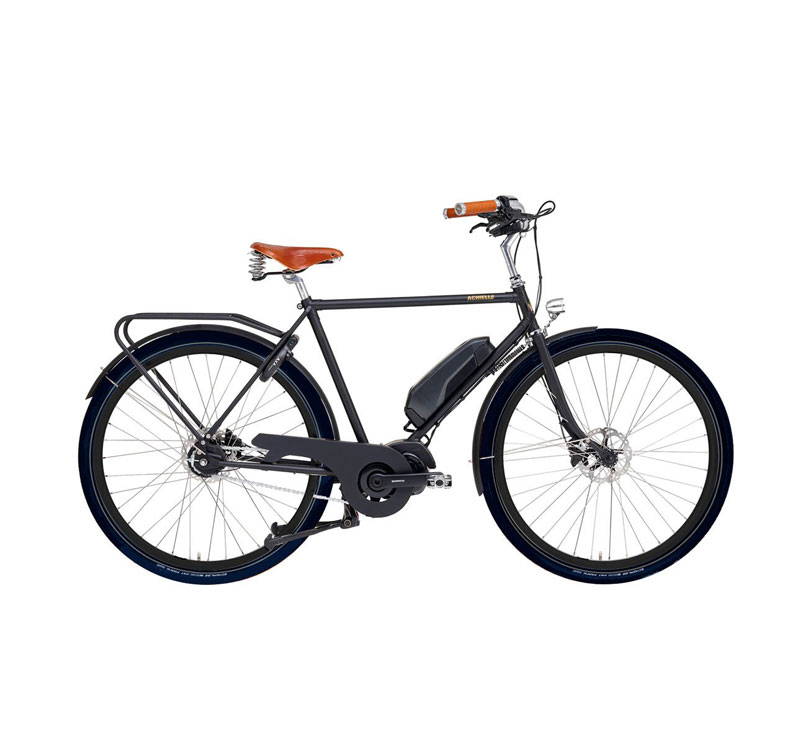 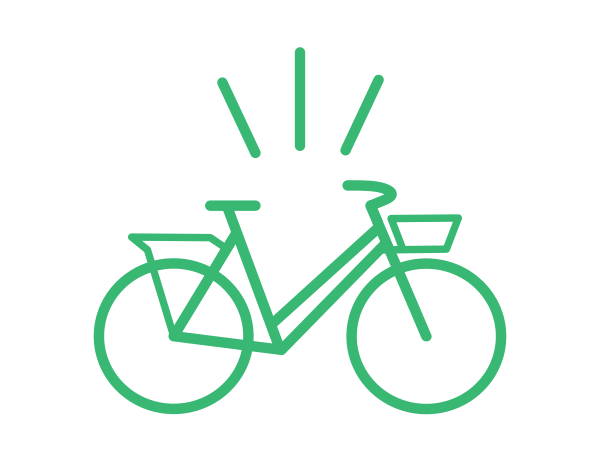 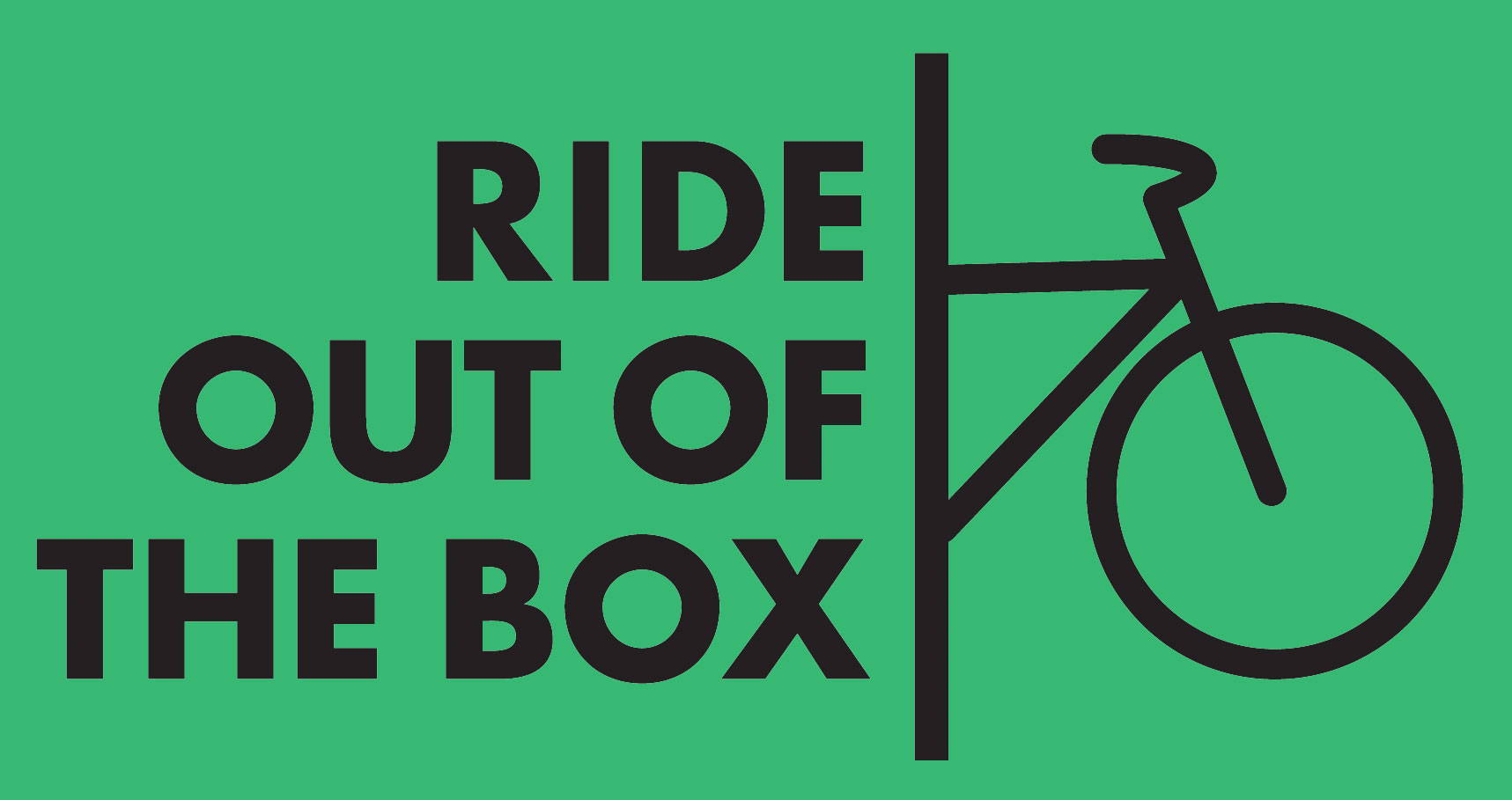 Why Achielle? Well, a lot of people are looking for a "Dutch" bike these days, but this term is becoming more and more unclear. Brands like Linus make a California interpreation, called a "Dutchi," but these bikes don't come close in quality to a real Dutch bike. Then there are historical Dutch brands like Gazelle, Batavus and Azor who may be from Holland, but more-and-more have moved production to Asia. Achielle is the last company in the Benelux region (Belguim, Luxembourg, Netherlands) region that still makes bikes nose-to-tail in their factory near Ghent. Ghent might not be Holland, but it might as well be. Less than 20km from the Dutch border, it's a town where everyone speaks Dutch and everyone rides a bike. It might be the last place on earth that still produces the purest version of what we call a "Dutch bike." Choose from electric-assist bikes for cities like Vancouver or Montreal, classic city cruisers for dense cities like Toronto, and comfortable upright bikes for anyone who wants to feel the joy of riding a bike for the sheer pleasure of it.